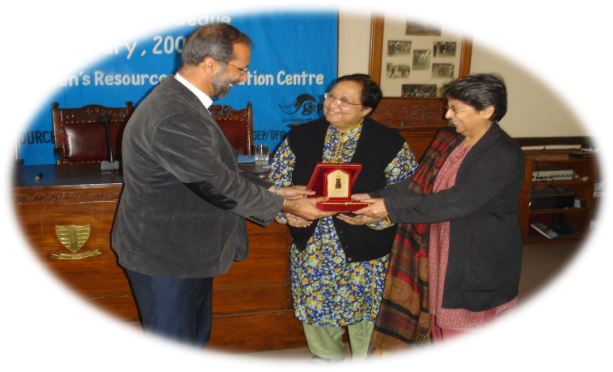 Posted at 07:54h in events by Simorghorg 0 Comments
0 Likes

A series of three lectures were  held in January 2006 as part of Simorgh’s overall aim to raise awareness and generate public debates on the ‘rights’ issues and related laws. Conducted by Najma Sadeque these lectures highlighted the threat to life and livelihood by globalization and WTO.

Over three hundred students and woman from walled city attended these lectures. Students of St.Anthony’s College, Government College University and team members of NGO Shirkat Gah participated in these lectures too.

The great level of participation confirmed these lectures success. It highlighted a need and drawbacks of official policy especially with regard to education which sabotaged its’ dissemination. It showed that public was not indifferent to various issues raised in these lectures-all they needed was acknowledgement and space where they could discuss, understand and address the various issues that concerned them.

In 2008, A Public Lecture by Najma Sadeque, an recognised name on environmental issues, was organized by Simorgh in collaboration with ShirkatGah Karachi at the Dorab Patel Hall in the Human Rights Commission of Pakistan building.

Najma Sadeque spoke passionately on issues of food security, poverty and development politics with detailed reference to the fisher folk communities of the coastal regions of Pakistan.